We are proud to announce the first speaker of #WCIT2021 – Mr. Vint Cerf, vice president and chief Internet evangelist for Google. Cerf has held positions at MCI, the Corporation for National Research Initiatives, Stanford University, UCLA and IBM. Widely known as one of the “Fathers of the Internet,” he received the U.S. National Medal of Technology in 1997, the Marconi Fellowship in 1998 and the ACM Alan M. Turing award in 2004. In November 2005, he was awarded the Presidential Medal of Freedom, in April 2008 the Japan Prize and in March 2013, the Queen Elizabeth II Prize for Engineering. 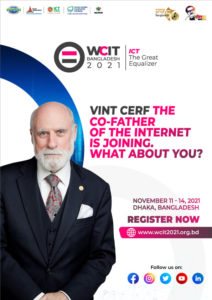